It took me a few weeks to digest the experience of attending the ‘Global Assembly of Knowledge Democracy’ organized by the Action Research Network of the Americas (ARNA). Something about the conference did not feel right, but I initially could not put words to it. I recognized that I felt out of place in the air-conditioned rooms of the convention centre in Cartagena.

I arrived to ARNA with a lot of enthusiasm. I was thrilled Recrear could be a sponsor of the conference, and I was honoured to attend alongside Carla, a grounded and energetic social entrepreneur from Medellin, and one of the nine co-researchers of ‘Plata, Cultura, y Cambio’, a research project on organizational culture and funding streams. We were eager to learn from others and to share what we had discovered in our research.

In the opening ceremony, the conference organizers cautioned academics not to get too comfortable. They paid homage to Orlando Fals Borda, an intellectual who had discovered quickly that he wasn’t going to find the knowledge he was seeking inside the walls of a university. So he travelled through his native Colombia and spent time learning from the livelihoods of farmers as well as from the experience of diverse marginalized groups. It was that intimate connection with communities that led him to develop a more coherent way to learn with others and facilitate reflections that led to action. This which became known as – Participatory Action Research (PAR).

Fast-forward to 2017, 20 years after his death, and Fals-Borda is still the light house for many. At the conference his old friends and colleagues continued the legacy he left behind. The organizers reminded us that Fals-Borda’s brilliance came about only when he left academia behind. They told us time and again that we needed to decolonize our practice. I found this rhetoric reassuring. In fact, all the words I heard at the conference resonated with me. The only problem is – these were mere words.

Over the next three days I attended symposiums and panels where academics spoke about interesting research projects. But I couldn’t feel the beating heart of what participatory action research means to me. Beyond a methodology, PAR is way of interacting in the world, a way of learning with others through close connections, empathy, active listening and reflection that can lead to action. The methods, epistemologies, ethics and research paradigms are part of that story – absolutely. But PAR is a practice, not just mere theory. And to be honest – the theory to me is not the most important. But in a conference overrun with academics – the center of gravity was noticeably different.

Things hit home on day two when it was our turn to run a workshop. Our session was about empathy in Participatory Action Research. We chose this topic because it was the glue and the spark that made our youth-led PAR project in Medellin, Plata Cultura y Cambio, come to life. I was especially excited to have Carla with me. To me, bringing her voice into this formal space was a way of continuing the practice of meaningfully engaging co-researchers.

After a hectic start to the workshop with a group of half English and half Spanish speakers – we facilitated a reflection on empathy. Then Carla presented our research project, while I translated. The discussion that ensued after was loaded. It detonated when someone, a self- identified academic from the UK and a female colleague next to them, said ‘to me this isn’t research, it’s advocacy’. I was barely able to translate before the room erupted in reaction. Voices shouting out ‘of course this is research’, ‘why shouldn’t we appreciate non-formal techniques’? and so on. I translated as quick as I could, barely having a moment to register all the comments. I couldn’t formulate my thoughts until someone asked that academic ‘Why wouldn’t this be research? What is research anyways?’. The academic retraced their words and clarified – for them what was important was that research should also contribute to theory – if not then what’s the point?

I got it in that moment. I intervened in the back and forth between them and the rest of the room to clarify that there is in fact ‘an academic’ behind all this. Her name is Gioel and Plata, Cultura y Cambio was her doctoral research. While we were there presenting the project she was still in the UK writing and making sense of it all. She wanted to come to the conference but between money and her own pressure to write – she chose not to. She also felt it wasn’t necessary because Carla owned the research just as much as she did. And isn’t that the point? For the act of researching in communities to be in the hands of its people? 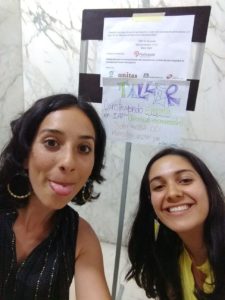 Carla and I pre-session

That’s what was missing from this conference – coherence. They asked us to be radical in our exploration and revolutionize our ideas. But that can’t happen if we treat academia as the ultimate validation for knowledge. Where is the knowledge democracy in that?

I didn’t feel like those two academics saw Carla or I. I felt observed through the eyes of academia and all its structural inconsistencies. I felt the judgement because we were two young women and yes we believe research should be done creatively – especially where young people are involved. We probably wouldn’t have succeeded with researching topics as heavy as ‘money, organizational culture and civil society’ if we didn’t find ways to make it more accessible and engaging for young people. Nonetheless that debate was a beautifully sobering moment. An acute awareness of the wider system we must interact with to negotiate what’s considered truly ‘valid’.

Carla and I were disappointed – but we weren’t discouraged. Because we also found others who truly embodied what Fals-Borda called ‘senti-pensantes’ – where feeling is knowing. These people did speak of values. They spoke of love, they looked us in the eyes and encouraged us to see one another, they opened spaces for active listening and storytelling. They sang, they shared poetry. All things that were sorely missing from most of the formal symposiums.

So it was only fitting that this undercurrent of subversive practitioners and academics occupied the closing ceremony. Not with aggression – but through celebration, affection and honesty. With the help of a band of young people, they formed a circle and one by one people went in the middle and shouted: “this conference is missing coherence”, “this conference is missing affection” “this conference is missing Fals-Borda”, and on they went. I marvelled at them, I held space for them. As they led the crowd out from the plenary room to the streets ‘where knowledge belongs’ they said, the organizers helplessly looked on. In all fairness – they knew what the protesters said was true, but they realized it too late.

So ARNA 2017 ended as it should have started. With a recognition of the values that are at the center of this whole world of Participatory Action Research. It doesn’t matter whether you are an academic, practitioner, or artist – we should never stop to search for those moments of creative destruction, questioning and connection, wherever we go. PAR encourages us to see research as an experience, to keep our knowledge grounded and fluid. It awakens us to the fact that we are all experts of our own reality.

*Reflection in Spanish with Carla coming out soon

Back to Basics: Look at inequality like a kid would!
October 16, 2014
Organizational Gratitude
October 14, 2013